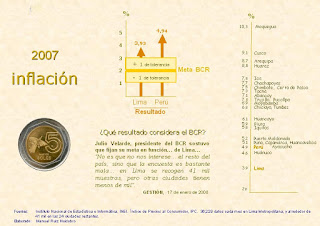 The government of President Rafael Correa, now celebrating his first year in office, has proposed a ‘citizen’s revolution’ that aims for economically sustainable, decentralized and socially inclusive development. Correa has formed new alliances with lower and middle class sectors and isolated the establishment powers of the nation’s oligarchy, its main media outlets, financial capital, central bureaucracy and the almost fossilized party democracy, not to mention renegotiating oil and mining contracts with foreign capital.

Unsurprisingly, those feeling the full force of reforms have reacted, calling the government authoritarian, populist, Chavistas and other things unrepeatable here. All because, in difference to previous Ecuadorian governments, this administration is keeping its electoral promises and has not been co-opted by the powerful and arrogant who are used to making behind-the-scenes decisions to benefit the 5% or 10% of the population they represent, always in the name of progress and nation wellbeing, (of course).

Although too early to claim victory, the reformist advances have been made possible by a president that has reached out to the majority of social sectors, as well as the happy coincidence that this government is led by people that have entered politics virgo intacto and have turned their backs on the scheming and mania of Ecuadorian party politics. I would add that (not knowing if good or otherwise) the President of the republic and the president of its constitutional assembly are economists, be they less mainstream than most (left wing neo-structuralists?).

The typical worry for a reformist government is that it might play to the masses, spend more than it can and cause its own downfall, be it via high inflation and/or an external deficit that dries up financing possibilities and forces the adoption of painful budget cuts, which end up with bureaucratic-authoritarian governments á la O’Donnell. We are therefore very interested in the fiscal laws that this government has proposed or already implemented to finance the “decentralized and redistributive human development’ which it intends to gradually introduce. The central point is to “achieve the rise of tributary pressure and that indirect taxes reach the same percentage as the reduced direct taxes”.

Moving on to details, if we look at the recently published “Reform law for tax equality in Ecuador”, we can begin by revising the modifications of the crucial personal tax law. The following charts show the percentages on annual gross income that tax payers must pay in the future (in red) compared to 2007 (in blue). We can see that theoretically the tax begins at gross incomes of U$7,850 per annum (U$654/month, which is the approximate average family income in Ecuador) in both cases. Then up to U$15,000 per annum, slightly below the average middle class average income, the tax burden is the same as before.

However in practice, the reform will also allow a new discount of up to U$10,205 for social security payments (IESS), incomes from the 13th and 14th month paychecks and above all expenses for education, health or rental of living accommodation. This brings several advantages: middle class earners will pay less than before (see illustrative example in annex 2) and more interestingly, they will have to show the necessary invoices to the tax office. Therefore health centers, doctors, private dentists, colleges, private teachers, landlords and perhaps even “independent professionals” will broaden the tax base. The tax evasion of lawyers, astrologers, economists, ecologists and others may still be difficult to detect after this becomes law, but there is hope that the diverse penalties, particularly prison (one to six years) that will come into effect will modify these attitudes. In addition, Ecuador will follow the lead of other countries and hold prize draws with tempting prizes for invoices deposited with the tax office.

Thirdly, changes in ‘tax on special consumptions’, as seen in annex 4. These are taxes ad valorem to the consumption of luxury or non-essential goods (non-essential except for those of us with vices and addictions): blond and black tobacco cigarettes (which rise from 20% to 100% and 150% respectively), perfumes (0% to 20%), jewelry (0% to 35%) cars (to be defined), planes and private yachts (from 10% to 15%), casinos and games of chance (14% to 35%), cable TV (0% to 15%, except educative channels), sports firearms (0% to 35%) and other firearms (0% to 300%), amongst others. In the new law, the government has scrapped its original plan to charge 15% for ‘telecommunications’, recognizing that cellular phones are a work tool for the smallest of businesses: the tax on beers and sodas has been slightly lowered: jewelry made by local artisans will not be taxable; traditional incandescent light bulbs go from 0% to 100% (to promote energy saving bulbs) etc.

Another tax that has been modified is the transfer of foreign money. The tax levied on foreign money remittances from abroad will be abolished (three million Ecuadorians live abroad, compared to 13.7m that live in the country) and substituted by a 0.5% tax on sending money to other countries, excepting monies for students, hospitalizations etc.

Next, an innovative new tax has been introduced, surely to avoid speculation and stimulate agro employment, which will apply to non-worked lands, or more exactly the possession of rural lands of more than 25 hectares lying at 3500masl or below. Indigenous communities, the state, universities among others are exempt from this tax.

Finally, there is the tax on extraordinary incomes (aka windfall tax). This will apply to companies with contracts with the state to exploit non-renewable natural resources when they enjoy incomes above those agreed or previously imagined in the mentioned contracts. The tax is 70% on the difference.

Added to the above is the decision some months ago to charge 99% (previously 50%) on the difference between the international crude oil price and the base price contracted (which is U$15). This is certainly a substantial income for state coffers, which along with the other initiatives will sustain substantive policies and social inclusion. Note that in 2007, for the first time in postwar Ecuador, government social spending (6.5% of GDP) was greater than the money spent on external debt servicing.

To finish, we should notice that the tax regime for company earnings has not been modified and remains at 25% (it could easily have been raised to 30%). Another thing is the proposal to reduce sales tax from 12% to 10% has not yet been discarded, which to us would be premature until the effects of tributary pressure have been observed via the introduced reforms.

Evidently, these tax proposals are not capricious or part of some personal vendetta(1), but have a clear ideology and solid theoretical substance which, for us, could have been formulated by the great Polish economist Michal Kalecki (2), precursor of Keynesian theory. In his essay from 1970, Kalecki proposed establishing “a development plan for a medium term, for example five to ten years”, but the questions of financing the development were found in the first phase, i.e.:

We will see that the two postulates are of considerable importance in fixing a course of economic development, because they center their dependence to a great extent on the offer of essential goods.” (p.155). He goes on to demonstrate this in diverse graphic and algebraic model throughout the text (3).

These principles fit in with Ecuador’s tax reforms, to which must be added (in relation to the first point made by Kalecki) that “the principal problem of “financing” growth is in adequate agricultural production. The financial key to quicker growth is to eliminate barriers that obstruct agricultural development, such as feudal land property and the subordination of the rural worker to commerce and creditors.” (loc.cit.: 162), a Herculean task that still faces this government.

In relation to the second postulate, he states that “it is correct to apply adequate taxes to high income groups and to non-essential goods. As I see it, here is the crux of the problem of financing the economic development in a mixed economy” (op.cit.). This even though he he conscious of the problems that this implies “due to the influence of interests over the government and the difficulties of beating tax evasion” (op.cit.).

To conclude; faced with this avalanche of taxation that will avoid any anticipated fiscal deficit, it is worth asking why the “external electorate” of Ecuador (i.e. debt qualifiers and investment banks) are not applauding the same as the internal electorate and in fact punish the country with a high country risk rating around 600 basis points with a rising tendency? To that one must add the fact that various taxes are with a view to potential external deficits, both of commercial balance and of capitals.

-----------------
(1) Álvaro Noboa, the colorful multimillionaire opposition to Correa in the presidential election, considers that the tax reforms have been created against him personally!

(3) The Kalecki models fit well with the proposals of Eprime Eshaq, "Sugerencias para mejorar los programas de estabilización del FMI", en: Revista Internacional del Trabajo, vol. 108, no. 3, 1989; pp. 351-75. He makes a clear distinction, in the manner of Marx, between departments I and II, proposing a type of “autocentering” (a la Samir Amin) between necessary consumption and the investment it needs.